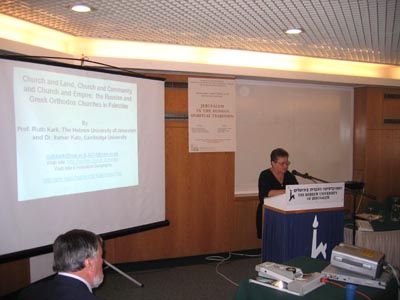 The relatively limited area and spatial distribution of Russian properties in comparison with that of the Greek Orthodox Church, and the fact that it did not become and economic or political power in Palestine, demands an explanation since both were active and acquired most of their properties during the same period. Furthermore, the financing for the purchases by the Russian Church came from one of the most important world powers during that period.
Part of the explanation is that the Russian Church did not have the longstanding historical presence, the privileged legal and political status that the Greek Orthodox Patriarchate had in the Ottoman Empire and in the Holy Land. The Russian Church entered into a struggle and competition with the Western Powers in the Ottoman Empire without any holdings in the Holy Land, and particularly no possessions that bore an income like those of the Greek Orthodox Patriarchate at the holy sites. The implication of this was that all the Russian purchases of properties that were intended to be used to provide services to the Orthodox pilgrims and clergy required Russian financing. Indirectly, it also financed most of the purchases made by the Greek Orthodox Patriarchate.
Like other foreigners in the Holy Land, the Russians ability to purchase real estate was limited until the end of the 1860s by the Ottoman Land Laws. Unlike the Greek Orthodox Patriarchate, the Russian Church did not belong to the millet system and it did not have any rights to the properties of the Orthodox community. In addition, its relations with the Ottoman regime were often tense and not as strong as were those of the Patriarchate, even though the Russian Church was recognized during the second half of the nineteenth century. All these limited the Russian Church’s capacity to purchase or receive properties in contrast to the Patriarchate.
Conclusion
Fig. 9: Maria Magdalena Church, Mt. of Olives, Jerusalem
Christian Churches that operated in Palestine in the nineteenth and twentieth centuries played an important role in the sphere of capital investment in real estate and development. Among them, the Greek Orthodox Church and its Jerusalem Patriarchate took the lead. The Patriarchate took advantage of windows of opportunity that allowed it to considerably expand its stock of property and initiate wide-ranging entrepreneurial activities. This conclusion is strengthened through the comparison with the real estate activities of the Russian Church, which had as much financial power and the aspiration to strengthen its presence in the Holy Land, but lacked the appropriate circumstances and legal status, hence limiting its ability to purchase real estate.
With the outbreak of the Bolshevik Revolution in 1917, the Russian government support for the flow of Russian pilgrims to the Holy Land ceased and the Patriarchate was cut off from its properties in Bessarabia and Wallachia. This resulted in a severe financial crisis. The expansion of the Patriarchate’s and the Russian’s stock of land came to a standstill in 1917.
Present implications
Fig. 10: Russian Cathedral in Russian Compound, Jerusalem
The uniqueness of these ‘relic’ properties of the Greek Orthodox Patriarchate and the Russian Church in Israel/Palestine, beyond their spatial and economic influences over time, is their political and economic value in the present. The economic value of many of the properties is estimated today in the tens of millions of dollars, particularly those in urban centres such as Jaffa, Nazareth, and Jerusalem. These properties attract the interest and involvement of Governments (Israel, Jordan, Greece and Russia, as well as the Palestinian Authority) and private entrepreneurs. The economic and political significance of these properties enabled the Patriarchate and its monks to achieve major political and financial gains. This is to be dealt in a separate paper.
Thank you
[For example, the Patriarchate owned 96 apartments in Jaffa, which had an estimated value of $28.8 million in 2000.]
© Рут Карк. Профессор отделения географии Еврейского университета в Иерусалиме
Доктор Итамар Кац.
При перепечатке материала - ссылка на сайт "Россия в красках" и адрес http://ricolor.org/ обязательна