The beginning of communication of Orthodox churches traces its origin in the days when Russian patriarchate didn’t exist, i.e. until 1589. The representatives of the Orthodox Churches of the Middle East1 - Alexandria, Antioch, Jerusalem, which were under Ottoman domination in 1516-1517 years came to Moscow for spiritual fellowship and for financial assistance. Since that time active correspondence has been maintained between Moscow and Middle Eastern patriarchates. 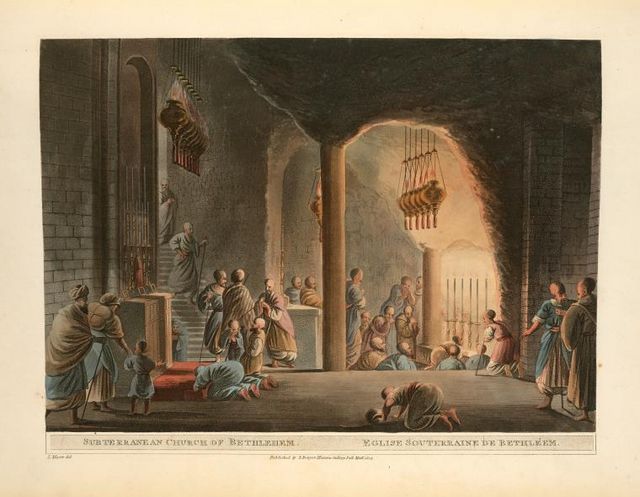 First contacts of Patriarchate of Alexandria with Rus began under Patriarch of Alexandria St. Joachim I2, who sent a mission to Moscow Grand Prince Vasili III, the main objective of which was to obtain financial assistance. In 1556 a new embassy of St. Joachim departed to Ivan IV the Terrible.

One cannot ignore that Ivan IV, crowned in 1547, i.e. having become equal to descended from the historical stage Byzantine Caesars3, sought to assert its authority in the Orthodox world. To achieve this objective a mission headed by merchant Vasily Poznyakov to the Middle East was organized, where huge, but highly targeted donations had been made. During his visit, Poznyakov met with St Joachim and the Patriarch of Jerusalem Herman I. In connection with this the visit of Metropolitan of Bethlehem Joachim to the court of Ivan IV in 1582-1584 can be considered as a return visit from the Patriarchate of Jerusalem.

“Vasily Poznyakov - participant of the embassy sent by Tsar Ivan IV to Tsargrad4, Alexandria, Sinai, Jerusalem in 1558 in order to provide financial assistance to the Sinai Monastery of St. Catherine which suffered from the Turks. Patriarch of Alexandria Joachim applied for this help with official missive letter to the Tsar and Metropolitan of Moscow. Embassy from Moscow to the East (through Smolensk, Lithuania5, Voloshskaya land6), which lasted more than two and a half years had met some difficulties and challenges: in Lithuania it was robbed, 300 rubles in cash and valuable furs were taken away; archdeacon Gennady died in Constantinople. But still some secular people remained as a part of the embassy, in particular, Smolensk merchant Vasily Poznyakov with son, Kozma Saltanov from Pskov, Dorofei from Smolensk and others. It’s unknown who kept record and made description of walking to the Orthodox shrines of the East. Yet at the end of the XVI century it was the basis of walking of Tryphon Korobeinikov, which permanently displaced the memory of the actual trip of Poznyakov, the details about which are saved in the second Novgorod Chronicle.

Value of Vasily Poznyakov walking lies in richness in legends and news heard by the travelers when visiting monasteries and churches of the Orthodox East. Some legends date back to the biblical plots, such as the one about the Prophet Elijah, about the deeds of the prophet Moses and others; there also are a lot of mentions and people from New Testament7. Apocryphal stories take significant place in the walking. One of the plots, the miracle with the Patriarch of Alexandria Joachim, was included as a separate story into the Russian Chronograph and Old Russian collections of XVII-XVIII centuries.

The same task, financial assistance to the Middle East Orthodoxy, was completed in 1583 by Ivan Mishenin and aforementioned Trifon Korobeynikov and Mikhail Ogarkov and the same Trifon Korobeynikov in 1593. However, in these both cases Russian tsars themselves had a need for spiritual communication: “Moscow merchant, and there is a speculation that he also was a clerk, Trifon Korobeynikov… was a participant of the Embassy of Ivan IV to Constantinople and Mount Athos, sent in 1582 in remembrance of soul of the murdered prince John Ivanovich. In 1593-1594 years Korobeynikov visited Constantinople and Jerusalem with the clerk M. Ogarkov, sent again with alsm, but grace, for the birth of princess Feodosia8. In 1603 the Jerusalem delegation from Patriarch Sophronius IV headed by Archimandrite and oncoming Patriarch of Jerusalem Theophan III made a return visit to the court of Boris Godunov. Theophan III, already being the Patriarch, visited Moscow for the second time in 1619 in connection with the enthronement of Patriarch of Moscow and All Rus Philaret.

In 1585-1586 years Patriarch of Antioch Joachim V took a trip to Russia and became the first representative of Eastern Orthodoxy, who personally visited Moscow. He was forced by plight of his throne, which had big debts. His visit was used by Tsar Feodor Ivanovich to start negotiations on establishment Patriarchate in Rus. Joachim agreed to intercede for it after returning to the East. As a result, in 1590 the the Metropolitan of Moscow Job was exalted in the rank of Patriarch of Moscow and All Russia.

Under Tsar Alexei Mikhailovich Patriarchate of Jerusalem greatly influenced Russian church life: as a result of activity of the Patriarch of Jerusalem Paisius, who repeatedly visited Moscow in 1630-1640-ies., i.e. before his enthronement, Patriarch of Moscow Nikon began his church reform. This is confirmed by the fact, that the reform of Nikon, began after the visit to Moscow of Envoy of Patriarch Paisius Metropolitan Gavriil Blasius.

Patriarch of Alexandria Paisius was the first of Alexandria Primates who visited Russia: in 1666 he arrived to Moscow, where he took part in the Great Moscow Council as a co-chair of Patriarch of Antioch Macarius III9, who condemned Nikon and excommunicated old believers from the Church.

Patriarch of Jerusalem Dositheus II personally selected teachers for opened in Moscow in 1687 Slavic-Greek-Latin Academy to strengthen his influence.

Appeared under the Patriarch of Jerusalem Paisius aspiration of some Middle Eastern patriarchs to participation in purely foreign policy affairs acquired the most pronounced character under Dositheus II. However, their influence as of political agents of Russia began to decline later in connection with expansion of its network of consulates in the Ottoman Empire.10

1 The relations with the Patriarchate of Constantinople, which are advisable to consider in a separate study.

2 In 2003, the Orthodox Church of Alexandria canonized Joachim I and the same year, the Holy Synod added his name to the diptych of saints of the Russian Orthodox Church (commemorating - September 17, Julian calendar). [Electronic resource] URL:http://www.patriarchia.ru/db/text/2025397.html (in russian).

3 Byzantine Empire ceased to exist with the conquering of Constantinople by the Ottoman Turks in 1453.

5 Huge Lithuanian-Russian state, which included, besides the Lithuanian territory, territories of modern Belarus and most of Ukraine is implied under Lithuania. (P.G. note).

The International Journal of Arab Studies